Loss of a good worker means the hassle of hiring a replacement, training the new person and getting other workers to pick up the slack in the meantime. 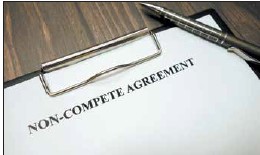 It’s even worse if the departing employee had specialized skills, intimate knowledge of your operations and information such as customer lists or trade secrets that you want to keep confidential.

That’s why many employers have workers sign noncompetition (or “noncompete”) and nondisclosure agreements, contracts under which workers promise that, should they leave, they will not work for competitors for a particular period of time and will not share or use any confidential information they acquired on the job. But if your workforce is made up of low-paid, low-skilled workers, you should think twice.

Courts across the country are becoming increasingly unwilling to enforce noncompete agreements, especially those that appear to be more about limiting worker mobility than legitimately protecting secrets from competitors.

For example, the New Hampshire Supreme Court has refused to enforce noncompetition agreements for light-industrial laborers who had no access to confidential information and could not possibly undermine goodwill the employer had generated in the field.

Similarly, the Maryland Court of Appeals refused to enforce a noncompete against workers who simply delivered packages and did not use specialized skills that the court felt noncompetition agreements are designed to protect.

Meanwhile, courts in Michigan and Delaware have refused to enforce noncompete agreements against swim instructors and janitors, calling such agreements “overbroad” and finding that they unfairly limited the right of workers to continue to ply their trades.

The Rhode Island Supreme Court even refused to enforce a noncompetition agreement against a relatively low-level employee who had learned how the employer made special paper to cover books and packages. Because the employee was a low-paid worker who held a low position in the company, the court decided the noncompete agreement was designed to control workers rather than protect the company’s secrets.

Some states now have passed laws that flat-out prohibit noncompetition agreements for low-level employees. In 2017, Illinois passed such a law; it bans noncompetes for workers making less than the greater of $13 per hour or the federal minimum wage.

Has your state passed such a law? Talk to a lawyer to find out.