If your employees have signed an agreement to arbitrate any employment disputes, you need to act fast if you really want to keep the case out of court. If you sit on your rights, you might lose them.

That happened recently in Rhode Island, where an exotic dancer brought a class action against the club she worked for, claiming it misclassified her and other dancers as “independent contractors,” resulting in their losing out on pay the club owed them under the law. 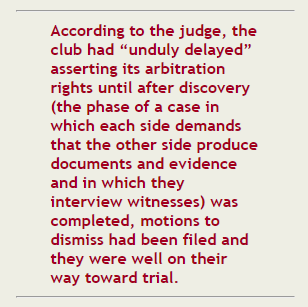 At the time she brought the case, the club claimed her signed contract and those signed by other dancers had gone missing in a disorderly and chaotic “records room” at the club. Meanwhile, the dancer denied ever signing any such agreement.

About two years later, the club manager found an agreement she had signed when she started working there. At that point the club filed a motion in court demanding that the case be referred to an arbitrator as called for under the agreement.

But a federal judge refused to do so. According to the judge, the club had “unduly delayed” asserting its arbitration rights until after discovery (the phase of a case in which each side demands that the other side produce documents and evidence and in which they interview witnesses) was completed, motions to dismiss had been filed and they were well on their way toward trial.

The fact that the club had continually asserted its right to arbitration in its pleadings and in pre-trial conferences didn’t matter, the judge said.